Ezra Klein points to a study on global warming (pdf) from the Lancet and University College London. As Ezra notes, one of the many complications involved in global warming is that the countries most affected by it will be those that are least responsible for it. Look at these two maps, which Klein posts: 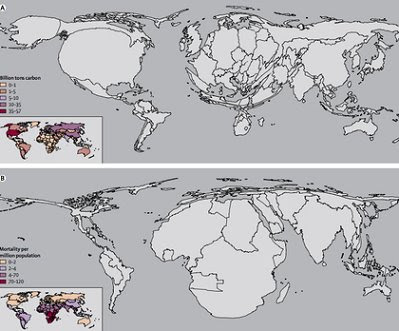 The top map is a cartogram with countries scaled to represent their cumulative CO2 emissions from 1950-2000; the bottom map shows the distribution of mortality as a result of global warming health consequences (in particular, malaria, malnutrition, diarrhea, and flood-related deaths). What's immediately obvious is that those who are most responsible for global warming - the US, Europe, Japan and, increasingly, China - will pay only a small fraction of the price; whereas the countries that makes the most negligible contributions to global warming, especially in Africa, will bear by far the largest burden.

Here's a thought experiment: see if you can imagine a problem that more exquisitely exploits the weaknesses of our nature as human beings than global warming. It's as if the problem were cooked up in the devil's own lab. Consider:


That's just a partial list of the really fundamental aspects of human nature - a nature that has evolved over millions of years to deal with a very different set of problems - which seem almost perfectly unequipped to deal with a problem like global warming. This is why I'm not especially optimistic about our ability to come to grips with this problem before widespread calamity is ensured, and why I expect the people of the late 20th and early 21st Centuries will go down in history as the people who traded a healthy world for a pile of Big Macs and SUVs.

On the other hand, if we are able to meet the challenge, think of what that would mean: that we were able to overcome everything innately self-interested and short-sighted and stupid in our nature to retain a livable home for future generations. That, to me, seems like enough reason to keep trying.
Posted by Chachy at 5:10 PM

It's definitely worth linking to Lancet and University College London to see their huge library of maps that help one better understand key social dynamic trends. I developed a screencast around many of them named the "The World is Not Flat".

well post, i was looking the same information to write essay on global warming.

partial decriminalization in spirit. just kind of sad and ridiculous in practice - i think that's how i'd define it.

Oh my god, there is really much effective info above!

A great deal of effective info for me!

Quite worthwhile information, lots of thanks for your post.

If you have a history of illness that is difficult to recover, maybe our next article will help you to recover