This report from Science Daily is interesting:

Researchers from Oregon State University, NASA and other organizations said today that they have succeeded for the first time in measuring the physiology of marine phytoplankton through satellite measurements of its fluorescence – an accomplishment that had been elusive for years.

With this new tool and the continued use of the MODIS Aqua satellite, scientists will now be able to gain a reasonably accurate picture of the ocean's health and productivity about every week, all over the planet...

"Until now we've really struggled to make this technology work and give us the information we need," said Michael Behrenfeld, an OSU professor of botany. "The fluorescence measurements allow us to see from outer space the faint red glow of tiny marine plants, all over the world, and tell whether or not they are healthy. That's pretty cool"...

The bottom map shows the global distribution of phytoplankton fluorescence. 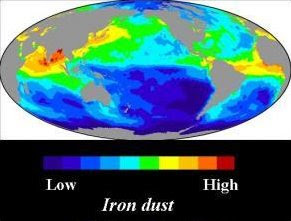 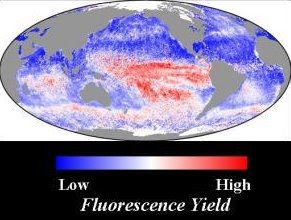 They've already made some discoveries about the correlation between iron levels in the oceans and phytoplankton growth.

Some surprises are already in.

It was known, for instance, that parts of the equatorial Pacific Ocean, some regions around Antarctica and parts of the sub-Artic Pacific Ocean below Alaska were limited in production by the poor availability of iron. The newest data, however, show that parts of the northern Indian Ocean during the summer are also iron limited – a phenomenon that had been suggested by some ocean and climate models, but never before confirmed.

"Iron is often brought to the oceans by dust coming off terrestrial regions, and is a necessary nutrient that often limits the potential for marine phytoplankton growth," said Allen Milligan, an OSU assistant professor of botany and co-author of this study, which is being published in the journal Biogeosciences.

"If forces such as global warming, circulation changes or the growth of deserts change the amount of dust entering the oceans, it will have an impact on marine productivity," Milligan said. "Now we'll be able to track those changes, some of which are seasonal and some of which may happen over much longer periods of time. And we'll also be able to better assess and improve the climate models that have to consider these phenomena."

They mislabeled the scales or something, because the maps are saying that plankton levels are high where iron levels are low & vice versa, which is the exact opposite of what is said in print.

This makes these hermes bags so special and rare brand of bags in the market that customers await for these bags with abated breath. Not only the common man but also the celebrities are on the waiting list for buying birkin . With so much craze and craving for this bag one can understand the importance and value of berkin bag .
The lida weight loss pill is currently being marketed as a safer and less drastic alternative to gastric bypass surgery or any other type of surgical intervention or invasive method aiming to limit the amount of food that a person is able to absorb and digest. At lida slimming maximum capacity, the lida daidaihua weight loss pill can swell or expand to as much as 1,000 times its normal size, approximately weighing about one liter. This new innovation of slimming capsule has been met with very high prospects and hopes by both scientists and consumers. Let us cross our fingers that the daidaihua weight loss pill is indeed the answer we have been waiting for to solve all our weight loss problems. As of this writing, the slimming capsules weight loss pill is still undergoing final tests and trials, but will be available for purchase in the market very soon.
People with different face shapes should wear different uk Tiffany . If you have a round face, then you should wear long drop silver necklaces instead of hoop earrings. This will make your face look less plump. If you are long-faced, then you’d better choose Tiffany pendants or big earrings to make your face look more fetching. If you have a square-shape face, then silver pendants , long drop earrings or exaggerated earrings can make you look livelier.
Ladies, when you want the best of the replica Chanel handbags world, there's nothing more perfect than a Chanel handbag . If you are truly looking to buy Chanel handbag, you won't believe how much selection there is online - you'll be drooling over the wide variety of styles and colors of chanel watches .

To raise new questions, new possibilities, to regard old problems from a new angle, requires creative imagination and marks real advance in science.

To my mind everybody have to glance at this.

It won't actually have success, I consider this way.

Thanks for the helpful information. Because, I just found out there is a very extraordinary article like this, thanks

Read this basic information about animals and the specific types of food they eat at What do animals eat?

Our essay writers are provided with constant training on the best and latest strategies to use in providing original Custom Paper Writing Services and Online Essay Writing Services to our clients.

I really love reading this article. Thanks for sharing this. Try to check this too
Types of Insectst