the transport politic has an alternative proposal for a high-speed rail network for the US: 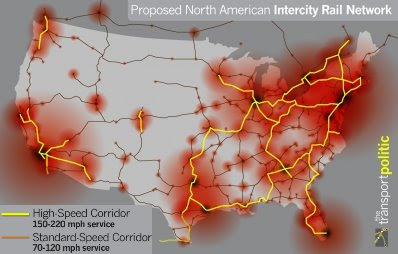 By contrast, here's the official high-speed rail plan as proposed by the White House in April: 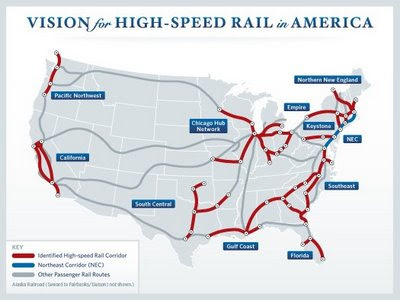 Among the differences: the ttp plan includes a route for the Colorado Front Range which the gummint plan lacks; it also integrates the major components of HSR in the eastern half of the country, from the Northeast Corridor to Texas; and integrates the Arizona 'Sun Corridor' into the California network. Whence the differences? Well, these are among ttp's criteria:

the transport politic’s proposal was informed by an analysis of potential travel between metro regions of populations greater than 100,000 and between 50 and 500 miles apart... The vast majority of train travel would occur on trains running at 150 mph or above on routes of 500 miles or less. Roads and airports along these corridors would be significantly decongested as more people choose to take the train instead of a car for short to medium distances (50-200 miles) and the train instead of the airplane for long distance (300-500 miles) travel...

There is no transcontinental high-speed railroad proposed here because high-speed rail simply doesn’t attract particularly high ridership above the 500 mile travel distance; the best way to get from the East Coast to the West Coast will – and should, barring some unforeseen technological advance – remain via airplane...

They also get into the nitty-gritty of how such a plan ought to be administered:

the transport politic’s suggestion is that the most appropriate way to get the ball rolling is to separate train operations – Amtrak – from track possession and maintenance by setting up a national infrastructure owner – let’s call it NatTrack. This agency would take hold of the Amtrak-owned Northeast Corridor and begin acquiring and assembling land for future high-speed rail corridors. Through eminent domain, it would also take possession of a large number of the nation’s freight lines, most of which are currently under-maintained and poorly managed, and begin converting them to standard-speed rail operations. NatTrack would manage route creation, not only in buying land and constructing track, but in prioritizing corridors to build new lines, deciding which to implement, and when.

Here's their proposal for order of implementation: 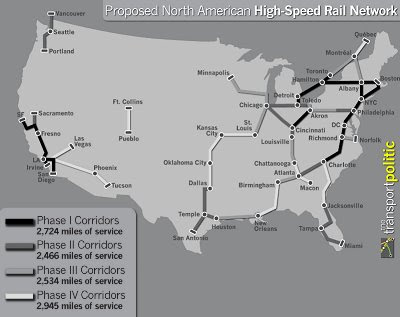 By the way, as a Texas-based blog, The Map Scroll heartily endorses the plan to include Houston in the Texas HSR plan along with San Antonio, Austin, and Dallas-Fort Worth, which the official plan stupidly fails to do. Intermodality shows a plan specifically for Texas:

There are lots more details for the transport politic's plan, including scoring for every route based on a function of distance and expected demand. It's really a comprehensive analysis and well worth checking out.
Posted by Chachy at 6:45 PM

Chachy,
Timely post. By coincidence Real Clear Markets had a post criticizing the President's HSR Strategic Plan today. (What else do you expect from RCM?) I posted a link to your post there.
P.S. Keep up the good work.

If it could be....So aspirational. I would love nothing more than to see these plans - any of them really, come to fruition.

Even without a giant infrastructure investment though, there are things we can do to improve rail travel. How about bring costs down? For many of the >500 mile trips, it's actually cheaper to fly right now. A friend just flew from NYC to Boston for less than the train, for instance. That's just silly. And how about that track maintenance? Not to mention that in much of the country freight has priority so the folks who do fork out for rail travel often get less than their money's worth, scheduling wise. (i won't even talk about the redundant absurdity of boarding tickets)

There just isn't much incentive to take rail these days. High speed rail corridors would be awesome, but we can't even make amtrak work well as is. Lets make that part of the discussion

MAS - Thanks! Actually, I expect nothing from Real Clear Markets, as I don't know what it is. But whenever the subject of 'markets' come up, I tend to start disagreeing with whoever's around, so I have a feeling I wouldn't be amenable to their criticisms.

MC - One thing that is becoming clear to me is that the Obama plan for "high-speed rail" is actually not all that high-speed for the most part. It mostly seems to involve restoring rail service to where it was in like the 1920s, when passenger rail typically ran at Acela-like speeds. (And it's a bit of a stretch to even call Acela high-speed, of course.) On the one hand, it's sort of depressing that "progress" on our transportation infrastructure involves returning to a level of service we had 3 or 4 generations ago. But hey, it is progress, after all... Just note that this plan is much more ambitious than the official plan in terms of implementing actual high-speed rail. But I'm with you - in so far as any of this actually happens, it'll be to the good, and would hopefully build momentum for the rest of it.

As for flying from Boston to NYC - yeah, pretty absurd. Though also a bit of an anomaly I imagine. For one thing, air travel prices kind of plummeted from sheap oil last winter and the recession, but that won't last. For another thing, it might have been nominally cheaper, but I bet that when you add in the costs, in time and money, of getting to and from the airports in Boston and NYC, plus the dignity-sapping trial that is going through airport security checks these days, etc., that the savings from flying were minimal, if there were any at all. But yes, this is exactly the sort of trip which rail is best suited for: medium-distance trips like Boston-NYC, Seattle-Portland, Houston-Dallas, LA-SF, etc.

Here's a semi-related fun fact I heard recently: you used to could get from Boston to Chicago entirely on intercity light rail, but for a 30-mile or so gap in upstate New York. It's really incredible how thoroughly we dismantled our mass transit infrastructure in this country.

Oh my god, there's a lot of worthwhile info here!

Of course, the writer is completely fair.

Hey, there is really much worthwhile material in this post!