Via Cartophilia, here's the US with all of the states' mottos by artist Emily Wick: 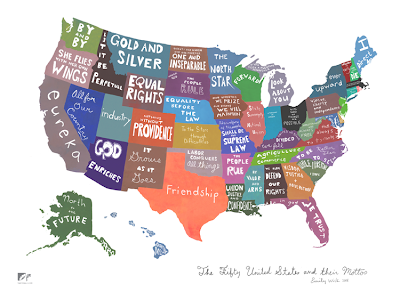 It's a clever piece of work. But what strikes me most about it is how very strange most state mottos are. I mean, many of them are cryptic at best - at worst they sound like drunken mumblings, or deranged ejaculations. Consider Kansas' "To the stars through difficulties." It begins with an almost misplaced strength of ambition, and then sort of peters out into vaguery. And then there's Michigan's cheerfully literal "If you seek a pleasant peninsula, look about you." Why yes, Michigan - I've had it with subpar peninsulas; this is just what I was after! Meanwhile, you feel like whoever wrote North Dakota's "Liberty and Union Now and Forever One and Inseparable" went on about one clause too long.

Other favorites:
-New Mexico's "It grows as it goes" and Washington's cryptic "By and by" sound like they could have been penned by Gertrude Stein.
-North Carolina's ontologically befuddling "To be rather than to seem."
-Arkansas' "The People Rule!" And South Dakota's not-to-be-outdone response: "Under God, the People Rule!"
-Virginia's "Thus Always to Tyrants." A bit defeatist for a state motto, no?
-California's "Eureka!" sounds, frankly, a bit unhinged.
-Maryland really needs to account for its "Manly Deeds, Womanly Words." What exactly are they getting at, anyway?
-And last but not least, Maine's "I Direct." I have absolutely no idea what is meant here, but I prefer to believe it's an expression of Maine's insecurity. Having been born as a mere spin-off of Massachusetts - the "Joanie Loves Chachi" (no relation, by the way) to MA's "Happy Days." Maybe this "I Direct" is a sort of over-compensatory jab at the rest of the states, born of Napoleonic-type grievance.

Or maybe everyone from Maine is just insane.
Posted by Chachy at 12:35 PM

jajajaja the only name that is not in this list is Cheap Viagra, with this and all the states have a singular nickname.