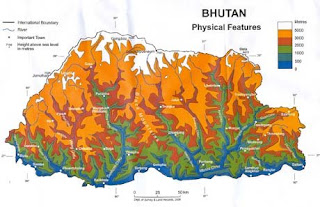 Bhutan - a cuddly little egg of a Buddhist kingdom tucked obscurely into the Himalayan Mountains - makes for a rather exciting topographical map, no?

But I bring it up here to raise a point: Bhutan is the most economically sophisticated country in the world. Oh, I don't mean they're wealthy - suited men in lower Manhattan have been known to sneeze out more than their GDP of about $1.3 billion. But the thing is, Bhutan has a policy of promoting Gross National Happiness:

Gross National Happiness (GNH) is an attempt to define quality of life in more holistic and psychological terms than Gross National Product.

The term was coined by Bhutan's former King Jigme Singye Wangchuck in 1972 soon after the demise of his father King Jigme Dorji Wangchuk who has opened up Bhutan to the age of modernization. It signaled his commitment to building an economy that would serve Bhutan's unique culture based on Buddhist spiritual values. Like many moral goals, it is somewhat easier to state than to define. Nonetheless, it serves as a unifying vision for the Five Year planning process and all the derived planning documents that guide the economic and development plans of the country.

While conventional development models stress economic growth as the ultimate objective, the concept of GNH claims to be based on the premise that true development of human society takes place when material and spiritual development occur side by side to complement and reinforce each other. The four pillars of GNH are the promotion of equitable and sustainable socio-economic development, preservation and promotion of cultural values, conservation of the natural environment, and establishment of good governance.

Now compare this to the 'developed' world's GDP, which is purely a measure of economic activity. The goal of any economy, we all are told, ad infinitum by our political leaders, the media, and the vast majority of economists, is to promote growth. This is how economic health is defined. So: a child breaks her arm? Good! More money going into the health care system. An enormous flood of toxic coal ash obliterates the Tennessee countryside? Good! Much economic activity will result from the clean-up and possible civilian population relocations. We drain the last drops of oil from our nation's bedrock? Good! Oil can be sold for money. (Never mind that a deduction from one's nation's resources ought to be considered by any reasonable measure a reduction of national wealth.) And war? Well...

But consdier the most intractable problems we face: poverty; malnutrition; deforestation; climate change. In all these cases, simple economic calculation doesn't provide the incentives to solve the problems. But the economic growth paradigm is sacrosanct - no politician dares to challenge it.

But Bhutan has. And here's the thing: until we start thinking in terms of GNH, rather than GDP, we're not going to be able to solve any of those problems. We're just not.
Posted by Chachy at 12:59 AM