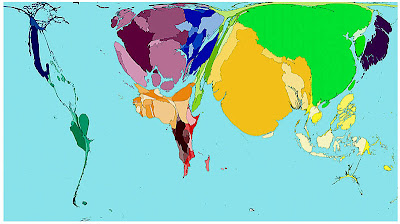 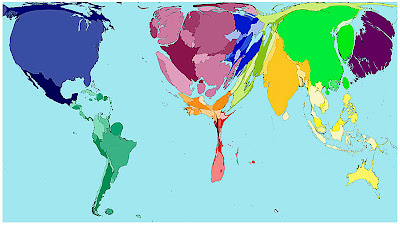 These are from the UK's Daily Mail. They're cartograms - and we loves the cartograms! - showing the relative wealth of nations in 1500 and in 2002; the larger the nation, the more wealth it had.

One thing I find interesting is that wealth at both times in history was tripodal. In 1500, the 3 big axes were Western Europe, India, and China; in 2002 it's the US, Western Europe, and East Asia. That might be a coincidence, or it might be the case that there's some reason that that's a more naturally stable way for wealth to tend to become distributed across the globe. Maybe the geography of the world is such that there tend to be dominant powers that exert enough power to dominate roughly 1/3 of the planet, beyond which further concentration of wealth sets off negative feedbacks, like the way growth in predator populations eventually starts to induce a negative feedback when they start eating all the prey and running out of food. But I lean toward coincidence.

Also: West Africa wasn't really doing too poorly for itself in 1500. Nigeria (or whatever turn-of-the-16th Century conglomeration of tribes and city-states and kingdoms constituted the area corresponding to modern Nigeria (you see how much I know about African history)), for instance, was about on par with the middle-range European nation-state of the time.

Plus: you might expect wealth to serve as a decent proxy for military power. But, while Mexico is clearly not the equal of Spain in 1500, the disparity is hardly so severe as to account for the fact that, just a few years later, Cortes would march into the Aztec capital with like a couple of drinking buddies and a mule and conquer the whole freakin civilization. So clearly other factors were involved. (And indeed, here are three suggestions.)

And finally: has Russia ever made good on its enormous resource potential?
Posted by Chachy at 9:34 AM

That is very interesting Smile I love reading and I am always searching for informative information like this. Kerja keras adalah energi kita

You will not see the most excellent and classiest ED Hardy hats and caps in the open market. This is marketed only in specifically authorized hardy shirt shops and stores. So once you buy an hardy shirt cap, you are assured that your head hardy shirts will be unique and one of a kind.

With these gorgeous Christian Louboutin shoes , yet inexpensive shoes, even your man must agree are the absolute best bargain you might have ever got. And how they make you look, so very gorgeous, you are definitely going to go out there and buy more of Christian Louboutin Boots . The instant you set your eyes on Christian Louboutin Pumps Armadillo Orniron Pleated Leather Bootie you knew that you would not mind shelling out more than what Christian Louboutin Sandals were retailing for.

this map shows the unfair distribution of wealth around the world, what a shame. We must do something about this situation.

This can't have effect in reality, that's what I think.

Fascinating article- I must say. I'm glad to have found this blog. thanks very much for the share...

In my opinion everybody should browse on this.