Social Cohesion in the UK

Here's another map on the social health of England: 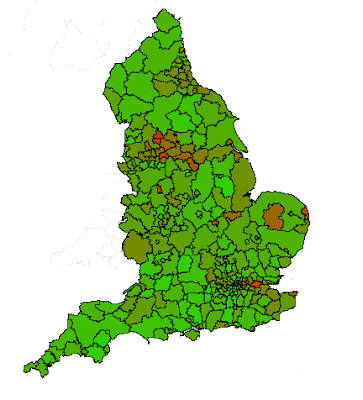 Mark Easton gives a description of the map:

The map colours range between bright green (where 100% of the population think that "people from different backgrounds get on well") to bright red (where 40% or fewer believe the same). Broadly, green means good race relations while brown/red suggests tension.

As with the anomie map, I'd be interested to see a version of this for the US. In both the UK and the US, my educated guess - and it's not more than that - is that you'd see better reported relations between races in areas that either have very low minority populations, or a very high degree of diversity. In the former sorts of places, minority groups aren't sufficiently prominent to pose a threat to the local majority group. In the latter sorts of places, there may be no majority group (as is the case where I live), and so members of diverse groups are pretty much forced to live and work together (and are liable to find that the world does not come crashing down upon doing so). In between, however, are communities where a majority of the population has historically been empowered (whites, in England), but where a significant minority population seems to represent a threat to their erstwhile hegemonic control.

Of course, tons of other factors, especially historical and economic ones, contribute to the nature of race relations. (I'm sure you'd find different attitudes on race in Vermont compared with southern Appalachia, even though both regions are almost entirely white.) But it would be very interesting to compare this cohesion map with a map of ethnic population by county in the UK. (I've been looking - I can't find one, but I'll post if I do.)
Posted by Chachy at 12:33 PM

Is religion a factor? Please consider these two religious demographic maps of the UK.

thanks for information.
article very nice..