The 2008 Election and Southern Whites 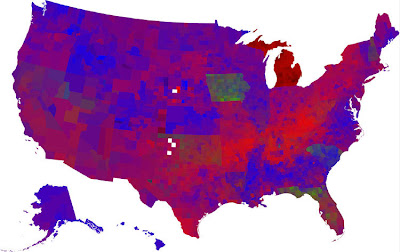 This one shows how Obama and Clinton did in the primaries. The redder the county, the better Clinton did; the bluer the county, the better Obama did. (Ignore Michigan and Florida; they didn't have real primaries.) You can see Clinton had an obvious region of strength from her home state of NY, down the spine of the Appalachians and through the Ozark states. This region is also known as the Upland South, or Appalachia. 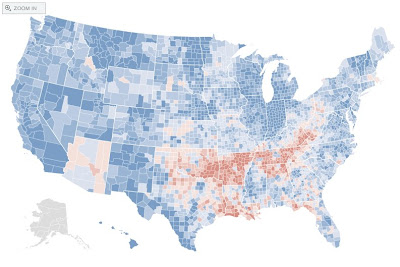 Notice anything about these two maps? There sure seems to be a strong correlation between the red areas in both of them, huh? In other words, it sure looks like Obama was unpopular in Appalachia. Indeed, that was a common theme in political commentary, during the primaries and right through the aftermath of the general election.

This analysis was wrong, though. It's true Obama underperformed in Appalachia. But another way to characterize Appalachia is as the area of the South which has few blacks. Now consider this map: 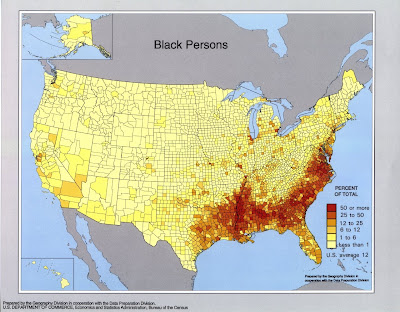 But what the conventional wisdom sometimes missed was that Obama did just as poorly among southern whites in areas with lots of blacks, if not more so. A final map, from dreaminonempty, to drive the point home:

Obama's worst states among whites were Louisiana, Mississippi, Alabama, and Georgia (all of which, along with South Carolina, went for Goldwater in 1964, incidentally: the only states besides Goldwater's home state of Arizona to do so). He did slightly better in those states overall, though, thanks to his huge margins among blacks. So Obama didn't have an "Appalachia problem," as some have alleged. He had a southern whites problem. (Though the better way to say it, probably, is that Southern whites had an Obama problem.)

Of course, not every region in the south was so hostile. He actually won Virginia and North Carolina, for instance. These are all areas where the New South has taken hold - areas which are more urbane, cosmopolitan, wealthier and more educated. He didn't win whites in these states, but he did do better among them than he did in the more rural and economically stagnant areas of the south.

It's fair to say that race has something to do with this pattern. But obviously, despite this obstacle (which was limited mostly just to the South), Obama won anyway. And this is progress. What will be interesting to see is what the results will be in 2012. Obama may or may not win, but here's a bet: those areas of the south will not diverge from the rest of the country as much as they did in 2008. They're among the most conservative parts of the US, of course, and I don't expect that to change. But I don't think they'll be quite so divergent. I think four years of an African American president will have an effect in these areas; I think whites will get used to the idea. And in so doing, the country may actually be able to make even more racial progress than was made in electing the first black president in the first place.
Posted by Chachy at 7:50 PM

Thank you for the article, really useful data.

I do agree, it is fair to say race has something to do with this pattern. However, there seems to be an assumption in the argument that the divide is isolated to the South and that's where things need to be improved. Maybe, but I've seen similar relationships elsewhere, such as taking a 10-15 minute train ride from Manhattan to Newark and seeing people dealing with poverty and they are black. The upper east neighborhoods, not really black at all. I don't think that's a coincidence. Seems like there is more to this relationship, where race melds with culture and identity, where we-ness meets other-ness. We helpers vs. the other needing help, We educated vs. the other uneducated, We whites vs. those whites, We rich vs. the other poor, the We culture vs. the other culture. I think it's better to push past the exterior of color and focus on the mentality of the other. If an argument focuses on displaying a negative light on the other, we are breaking down dialogue and building barriers. There is little progress for we-ness when the other experiences resentment.

I hope this isn't offensive. I do not mean it in that way at all. In fact, I am happy that you take the time to post these wonderful maps.