In commemoration of the historical event that will be unfolding tomorrow in Washington, DC, it seems like a good time to take a look at some political maps. To start things off, here is a map showing the percentage of female representatives in state legislatures in the US:

There are some interesting patterns here. The West and New England jump out as having the highest rates of elected women. Of course, Wyoming was the first state to grant women the right to vote, followed by the other early-adopting states of Utah, Idaho, and Colorado, so the West has a long tradition of being at the forefront of women's participation in democratic government. Meanwhile, as a result of the 2008 elections, the New Hampshire State Senate is the first statewide legislative body in the US to have a female majority - 13 of its 24 members are women. At the other end of the spectrum, the South has generally low numbers of women in state legislators, and South Carolina has the lowest of all - the only state where fewer than 10% of representatives are women.

Globally, only 17% of parliamentary members are women - an improvement on the 10% registered in 1995, but obviously still far short of the 51% of the world's population who are women. Countries with the greatest equality in representative government include Sweden (46% women) and Spain (41%). Turkey, by contrast, has only one female representative, and Romania has none at all.

Here'a a world map showing women in government as a proportion of elected officials: 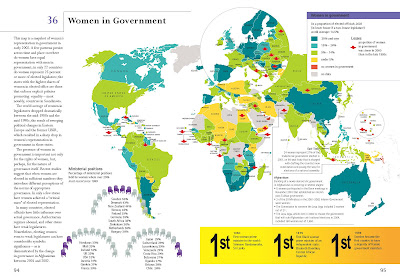 There aren't any countries where women form a majority of a governing body; in only 22 countries do they constitute even a quarter of all representatives. And, as in the case of so many social indicators, Scandinavia leads the way (though in this case, interestingly, so does southern Africa).
Posted by Chachy at 4:00 PM

See a map on women in politics with 2008 data, showing the proportion of women in national parliaments, on http://www.un.org/womenwatch/daw/public/publications.htm. The map was produced by the United Nations Division for the Advancement of Women and the Inter-Parliamentary Union

The map was produced by the United Nations Division for the Advancement of Women and the Inter-Parliamentary Union
http://hotgames4me.blogspot.com

Well many men would not like this, but actually I have a small business with my wife and she drives the money because she's better than me on that.

Here, I do not actually consider this will have success.

Thanks for this article, really worthwhile material.

In my opinion everyone must browse on this.