2008 was a real boon for political maps, like the ones I talked about here. Some of those suddenly vogueish cartograms were particularly bitchin, like these from dreaminonempty:

This one just shows the outcome of the 2008 election: the redder the county, the stronger it went for McCain; the bluer the county, the stronger it went for Obama. And of course, it's a cartogram, so every county's size is shown here in proportion to its population, rather than its land area. (That's why the map looks so pinched in the interior west, where populations are very small, and swollen on the coasts, where lots of people live.) Here's another:

Even though the Democrat did much better in 2008 than in 1988, there's actually a pretty big chunk of the country where the Republicans have grown much stronger over the past 20 years - there's a lot of deep purple in rural areas of Appalachia, the South, and the Great Plains. But what the cartogram makes clear is just how small, in population terms, those areas are. And while Republicans are doing better in those rural areas, Democrats are doing much better in urban counties throughout the country - even in the big cities of conservative southern states, like Atlanta, Dallas, and Houston.

So that's a lot of information you can get out of these cartograms that you don't get out of those stodgy old blue-red maps. Still, the geographic distortion on these is really severe - it's to the point that you can't really tell which places are being represented ny which blobs of color. But so check this out, from Axis Maps. It's the best map I've seen of the 2008 election (click on it for a bigger image). 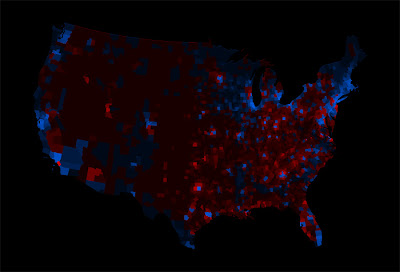 What they've done is very clever: they've used a regular spatial representation of the US, but indicated population density by simply shading more densely populated areas brighter. They use population density, rather than size, so as not to overstate the importance of very large counties, like San Bernardino in California, or whatever county Las Vegas is in. But the effect is still that areas are shaded brighter in proportion to their relative voting strength. It gives a good sense not just of the relative strength of Obama and McCain, but of where their strengths are based.

And one final variation: 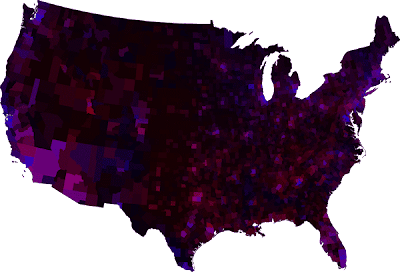 This shows the same info as the map above, but rather than a simple red/blue color dighotomy, it uses intermediate shades to indicate strength of victory. I would say that this would be ideal - it shows strength of victory and population size without geographic distortion - except that I have trouble reading the shades of purple. It's just hard for me to tell intuitively how the shades relate to each other (I'm clearly no tetrachromat). Regardless, kudos to Axis Maps for putting these together.

in my personal and respectfully opinion, both are the typical politician, and the true is, if Bush send a country to war, for MCcaine side, Bush stat thing and McCaine ended.

Thank you for this article, quite effective data.

Fascinating article- I must say. I'm glad to have found this blog. thanks very much for the share...
home treatments for hemorrhoids
oriflame network
Naturally Plus_PP
Naturally Plus_CK

It can't succeed in fact, that's what I believe.