More cartograms! This one shows oil reserves - the bigger the country the more of the black goo they have underground. 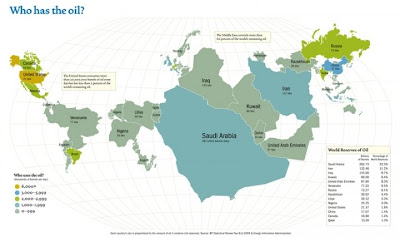 And this one shows energy consumption - not just oil, but you can bet this map tracks pretty well with regular old oil consumption, too. 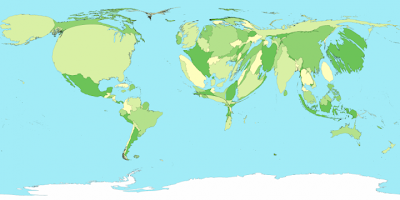 When it comes to oil, it's pretty obvious that it's the Saudi's world; we all just live in it. And if you throw in the other 11 members of OPEC - Algeria, Angola, Ecuador, Iran, Iraq, Kuwait, Libya, Nigeria, Qatar, United Arab Emirates, and Venezuela - you're talking about an enormous proportion of the world's reserves of oil. It raises (but does not beg) the question: is energy independence - getting off our addiction to foreign (especially OPEC) oil - a reasonable goal?

I can think of two ways to answer this: first, US oil production has been declining for 35 years, and no matter what the drillbabydrillers say, no amount of extra drilling, in Alaska or thte continental shelf or anywhere else, is going to reverse that long-term trend. Meanwhile, the population of the US continues to grow, there are still hundreds of millions of cars on the roads, and oil continues to literally be the lubricant that allows the economy to run (or, at least, to do whatever it's doing these days). Of course, the dependence is every bit as great for Europe (outside the exporting nations of Norway and Russia) and the big economies of Asia. Conservation can help, marginally, but short of a drastic and long-term reorganization of the world's energy infrastructure, the status quo will remain, and the Saudis, et al. will continue to have their fist around the IV that is the economic lifeline of the world.

There's another possibility, though, if the Export Land Model is correct. The ELM (put together by geologist Jeffrey Brown and others (see The Oil Drum for more)) argues that as a country reaches peak production, the combination of rising domestic oil consumption and declining production can cause net oil exports to, essentially, fall off a cliff, and even major exporters will reach zero net exports in just a few years. So the question is, are the major exporters anywhere near peak oil production? Because if so, that export spigot may be far closer to shutting off than most people realize. And so we might be far closer to "energy independence" than it seems, in the sense that we'd no longer be using much in the way of foreign oil - though energy independence, in such a scenario, would be a far grimmer outcome than any of us would want.
Posted by Chachy at 1:09 PM