Here is another attempt at slicing and dicing the US in order to paint a telling portrait of the political geography of the nation. This is by Dante Chinni at the Christian Science Monitor: 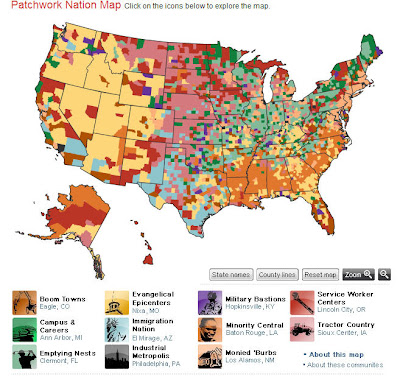 Rather than grouping more or less contiguous regions together, as Robert David does, Chinni defines 11 types of American community, and assigns each county to one of these types. They are:

2) College and Careers (green): college towns, the 13 million residents of which tend to be younger and more secular than the nation as a whole.

3) Emptying Nests (green-blue): these areas are older, whiter, and more evangelical Christian than the country as a whole; the 22 million people of these counties are concentrated in the Midwest and parts of the South.

4) Evangelical Epicenters (beige): concentrated in small towns and outer suburbs, especially in the South, and to a lesser extent in the West (largely thanks to the large Mormon population). Lots of young families boost the population of 27 million.

5) Immigration Nation (light blue): concentrated in the Southwest, these counties have large Hispanic populations (the average is 36%, but in many of these counties its much higher). 12 million people.

6) Industrial Metropolis (black): only 24 counties, but 38 million people, who tend to be young and diverse.

7) Military Bastions (purple): 5 million people live in these counties, the economies of which are oriented around the military. They tend to have high numbers of veterans and evangelicals.

8) Minority Central (orange): the majority of the 22 million people in these counties are actually white, but a disproportionately large number are African American (in the South and a few counties in the Midwest) or Native American (in a few pockets in the West). Tend to be poorer than the country as a whole

9) Monied 'Burbs (sort of flesh-colored): the most populous constituent of Patchwork Nation, with 84 million people and a median income above $55,000. They are clustered, obviously, around big cities.

10) Service Worker Centers (sort of ochre, I guess; some of these colors are tough): midsize and smaller towns with McDonalds-based economies. A bit older than average, and growing more Hispanic. 12 million people.

11) Tractor Country (geez, I don't know... fuchsia? Just look for Nebraska - it's that color): a ton of counties, but only 6 million people. White; mostly midwestern; rural.

This is an interesting effort. I might quibble on a few points. First, there are counties in Immigration Nation and Minority Central which are actually predominantly white, and where the culture and politics are dominated by the white populations; so I don't much see the purpose in assigning them to those categories. Also, how can Travis County, TX (Austin) not be a College and Careers county? And: "Minority Central"? We can't do better than that?

Also, I wonder if divorcing the notion of "political regions" from actual geographical contiguity isn't getting a bit too cute. I mean, why not break it down even further, to the level of towns or neighborhoods? (Of course, you have to stop somewhere, else you might end up with a map with 300,000,000 colored districts, each the size of one individual, a kind of Borgesian reductio ad absurdum of fine-grain analysis.) All in all, though, a useful map, I think, especially in conjunction with others that stick with the contiguity standard.

Here, by the way, is how the vote broke down by community type: