Nuclear Armageddon and You 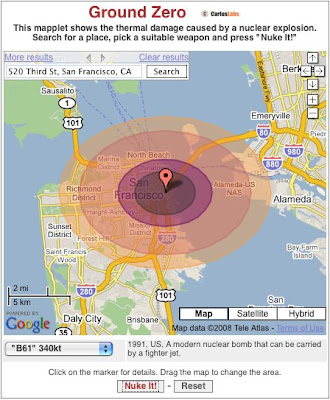 It's a Google Maps Mashup that lets you see the damage radius of nuclear strikes on given locations. It also lets you select by size of weapon - from Hiroshima's "Little Boy" to the 50-megaton "Tsar Bomba" of lore, the most powerful nuke ever detonated.

Yrs. truly would be a sure goner if anything above about 100 kilotons made a direct hit on my local downtown. That's actually a little better than I would have expected to do - I'm not far from downtown, and I would have thought any sort of nuclear direct hit would vaporize me instantly. It makes me wonder, actually, if the post-War move towards suburbanization in the U.S. was actually motivated by nuclear fear to a greater degree than I'd realized. I had sort of assumed that if you lived in a major metro area, any sort of large-scale nuclear war would do you in. But this makes it look like even your inner-ring suburbanites would have at least a fighting chance - especially if they'd made prudent investments in those backyard bomb shelters that were all the rage back then.

The "Tsar bomba" was incredible, there are I think some videos of the explosion, wow it is mind-blowing what we can do if we wanted to end life.

Very worthwhile piece of writing, thank you for this article.

I saw a great deal of helpful information above!

Here, I do not actually consider it is likely to have effect.