Here's more on wealth since 1500, from Visualizing Economics: 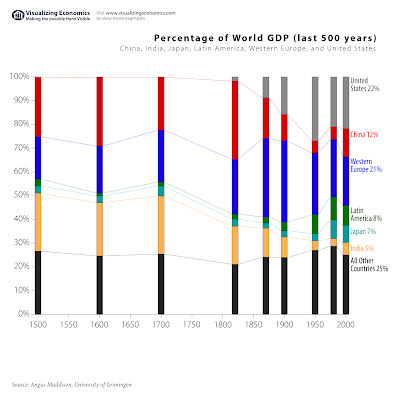 You can pretty clearly see that the story of the global economy from like 1750 to 1950 was really all about a redistribution of wealth from India and China to Western Europe and the US. Other regions of the world just didn't change that much one way or the other.

But it's also interesting how many trends have reversed themselves since ca. 1950. The dominance of the US and Western Europe has receded somewhat. Japan has about doubled its historical share of global wealth. China and India have halted their long slides (though they still have a long way to go to recoup their historical norms).

We'll check in in another 500 years and see how things are coming along.

UPDATE: I am told that - this being The Map Scroll rather than The Chart Scroll - good form demands that this post include a map. So, here is a moderately relevant map animation showing the changing map of Europe from 1519 CE to the present.