And one more from the LOC. This one stretches the definition of 'map' a bit, but it's so beautiful, and just so freakin cool: 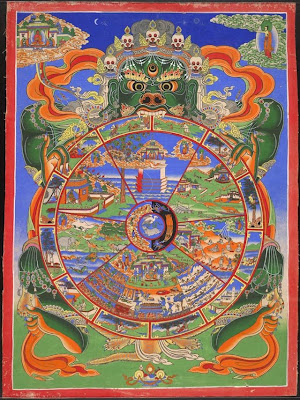 It's a 20th Century painting of the Tibetan Wheel of Life. From the Library's description:

In the Tibetan Buddhist world view, the six realms of existence (Gods, demigods, humans, animals, hungry ghosts, and hell-beings) are all held in the grasp of the Lord of Death. In the center of the wheel are the three root poisons of desire, hatred, and ignorance symbolized by the cock, snake, and pig, and on the outer rim are the twelve links of dependent origination by which all causes and effects are determined. The ultimate goal, shown by the monks in the left inner circle and the Buddha in the upper right, is to follow a path that frees one from these cycles.

Is this a map? I'm going to say it is. I'm going to say it's a sort of metaphysical map - a representation of metaphysical relations, rather than physical space. And its purpose is the same as that of a physical map: to render, through symbolic representation, a picture of the enmeshing environment within which we find ourselves from a broader perspective than any we could attain through direct sensual perception alone.
Posted by Chachy at 3:07 AM

I think every person ought to read it.

Fascinating article- I must say. I'm glad to have found this blog. thanks very much for the share...
home treatments for hemorrhoids
oriflame network