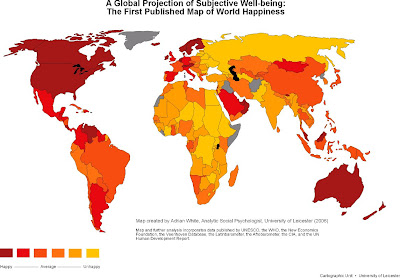 This map shows levels of "subjective well-being" around the world - i.e., how happy people say they are. A couple of thoughts on this:

First, just from eyeballing this map, it looks like there is a correlation between national wealth and general happiness, but not an exceptionally strong one. Most developed countries rate quite happy, while many poor countries, especially in Africa, rate relatively unhappy. But still - Guatemalans are happier than the French; Mongolians are happier than the Japanese; Kyrgyzstanis are happier than Russians. (And notice our Bhutanese friends seem pretty content - their GNH policy must be working.)

Second, I've long felt that once an individual (or a society) reaches a certain degree of wealth at which their basic needs - food, shelter, medical care, maybe education (i.e., everything that's fairly low on Maslow's hierarchy of needs) - that all further wealth has relatively low marginal utility. That is, if your basic needs are taken care of and you don't have to worry about them much, then non-wealth factors will have a much greater effect on your overall level of happiness. I think this map bears that out. While some regions, such as much of Africa and South Asia, are clearly unhappier than others, these are regions where basic needs are oftentimes not being met. (Most of the former Soviet Union also appears to be in a grim mood, as well, though this might be attributable to their particular sociohistorical legacy.) But if you look only at middle- and upper-income nations, I don't really see a discernible difference. Countries like Malaysia, Costa Rica, and Saudi Arabia are among the happiest in the world; Thailand and Colombia are comparable to France and Germany; etc. So if I were a nation, what I'd be trying to do is encourage economic growth to the point of achieving middle-income status, and once that goal is achieved, devoting additional resources to ensuring that the basic needs of all my citizens are met. (Of course, the premise of such a policy would be that happiness is inherently more valuable than pure economic power, and some might disagree with that.)

Third, though: I wonder how seriously any of this ought to be taken. People are not necessarily entirely reliable when it comes to reporting their own mental states. Depending on the methodology by which this data was compiled, it seems possible that cultural conditions or expectations influenced the way people reported their own feelings, regardless of what their actual feelings were. For instance, Anglophone countries all reported fairly high levels of happiness. Is this because Anglophone people are happier - or did the wording of the question have a particular connotation in English which was different from other languages? Or is there a legacy of the peculiarly Anglo "stiff upper lip" such that Anglophone peoples felt they ought to say they were happy, regardless of how they actually felt? Similarly, most Buddhist countries scored relatively high (again, including Bhutan). This could be because Buddhists tend to be happier - or it could be because Buddhists feel it's more important to report that they're happy. Because I think it's impossible to know which it is for sure, I would take this map with a medium-large grain of salt.

On the other hand - the French are the grumpiest people in Western Europe? Sounds about right to me.

UPDATE: Here's a snippet from a BBC article on the map:

Adrian White, from the UK's University of Leicester, used the responses of 80,000 people worldwide to map out subjective wellbeing.

A nation's level of happiness was most closely associated with health levels.

Prosperity and education were the next strongest determinants of national happiness.

Anonymous said...
This comment has been removed by a blog administrator.
December 9, 2009 at 2:45 AM

hermes bags that are smaller in size can be carried along when a make-up kit, a mobile phone or a wallet will be the only items to be brought. Although they are small, they come in style. After all, that is the signature of Hermes Ostrich – stylish. If the person wants to bring along larger things such as books or some papers, she can surely find bigger size Hermes Crocodile .
If you want to knock off those extra kilos from your body, try using daidaihua , a natural slimming capsule, which is a daily supplement that can help you get rid of your excess body weight. However, with people rushing to lose weight at any cost and a plethora of shabby products out there in the market that promise to make you slim in a jiffy, lida becomes important to review how effective lida slimming diet capsules will be for your weight loss regimen. To begin with, slimming capsule slimming capsules would be ideal for those people who start munching the burgers or French fries at the slightest pretext. By decreasing your cravings for snacks and other unhealthy food items, slimming capsules capsules will help you stay away from those extra kilos that you would have otherwise piled up by munching these tasty, yet unhealthy fast food items. The active herbal constituents present in lida daidaihua diet capsules effectively break down the fat molecules.
Chanel is known to be one of the most luxurious and decadent fashion houses in the world. Chanel handbag has a range of clothes, accessories, and make up, footwear and perfume that cannot be rivaled by many. This is what makes the fashion house such a success. But the one aspect of Chanel bag design that steals the eyeballs each time is their collection of vintage fashions. Whether it be gowns, shoes or handbags, one can be sure that the replica Chanel handbags vintage line will be a sight to behold.
A case in point is Tiffany . Despite having been in business for more than 100 years, silver pendants is still in extremely high demand all over the world. The price may not always be reasonable, but the cache of owning a piece of silver bracelets can make it well worth while for some. The silver accessories made many people madly love with them at the first sight because of their beautiful design and bright figures.

Come across out how to facilitate make a undo reverse phone lookup search or a telephone search otherwise even a phone number search search so whilst to come across away as of home who is bringing up the rear so once to personality with the aim of has been calling you this entire time ok.

Wow, there is a lot of useful data above!

This cannot succeed in reality, that is exactly what I suppose.

I'm very much impressed the way you write an article. Hope to read more from you.

Your posts are very unique and are very nice. It is worthy of sharing to others. Keep it coming. Thanks a lot!

Great work. I like this article a lot. I will definitely visit your site again. Thanks much!

I enjoy this nice turn around telephone lookup or cell phone search or cellular phone number lookup spot. I be capable of be trained much of cell phone lookup things regarding overturn telephone lookup here these days as soon as I check away this guide here. Promo Member Alfamart Minimarket Lokal Terbaik Indonesia Promo