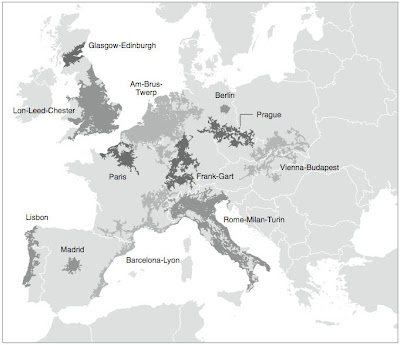 The megaregions of Europe, from The Rise of the Mega Region (PDF), a paper by Richard Florida, Tim Gulden, and Charlotta Mellander.

Accoring to the authors:

They make the interesting observation that though the European megaregions are comparable in size to those in North America, they are anchored by urban cores that actually tend to be smaller (with the exceptions of Paris and London). So the megaregional designation seems especially pertinent to the conurbations of Europe.

Can I just say, though, that compared to "Cascadia" and the "Texas Triangle," some of these megaregions' names are a bit lacking? I mean, "Am-Brus-Twerp" sounds like some exotic sort of polyp. How's about we change that to "Teutonia," or "The Land of the Very Tall Industrialists" or something? The strikingly uninspired "Lon-Leed-Chester" could be changed to "Teatown." "Rome-Milan-Turin" would sound much better if it were called "Berlusconi's Funland" (or alternately, "Italy"). And while we're at it, why don't we just go ahead and change Berlin's name to "Jelly Doughnut."
Posted by Chachy at 1:12 PM

Thank you for the article, very worthwhile material.

In my opinion one and all should browse on this.